The addition of custom dungeons where you can customize enemies appearances and moves lists would be the perfect icing on the cake for this game. Will there be anymore updates for this game?

Any planned updates to include an "enemy moves list" setting?  I think that was available in Kinky Fight Club.

How does that work gameplay wise?
An Enemy "catches" me and places a restraint on me that hampers me for the rest of the run or is it just cosmetical or only for the "scene"? (As a fan of escalating predicament I hope for the first of course ^^)

Ah, should have had a look at the demo first, question answered. Ill pick it up definitly then.

Is there a way to customize more details about the character like thigh/calf size hip size,  as well as breast y-direction rotation, basically more detailed customization? if not is there any chance it might be added?

Not gonna lie. A POV option for this game would be sweet. Even if it's only while being held. Just have the camera be able to look up and down from the PCs head. Also and way that you can make it so capture scenes aren't visually blocked by walls would go a long way.

i LOVE the defeated game over scene in this game :D

thank you for that scene!

is there a way to buy the 3d models for a project?, I think they are great

In my game the futa option don't work not in story or dungeon mode the futa mechanics is broken it don't matter if I put active,mixed or passive I am glad that my sister paid for this game for me and I din't not have to waste my own money.

Yeah, I just checked this, it seems I fucked it up on last updated, Ill get it fixed on thursday!

I'm running into some weird bugs on story mode, where the preferences I input at the beginning screen don't all seem to be functioning. Active/Passive/Futa/Etc. all seem to not function the way I select them, and the very first screen where you input your name and pronouns doesn't seem to work at all.

This is a good game, though the camera movement is opposite. So if I move my mouse right, the camera turns left. And that makes the game a lot trickier.

Is there a way to disable controller input? The game keeps reading the input from pedals or panels attached to the computer, overriding the keyboard Inputs.

Where can i buy the game ? I only see the demo.

There will be a demo of the game?

will u upload the full version on steam?

Yes, once it is ready!
(It will also be uploaded here, when ready)

Gonna try this new version, previously had played the 0.5 Version, was good, but had a lot of bugs (like for example your character would sometimes fall on ground and remain there, even when you still had willpower left and it was not a game over)

Edit:  Okay just played through a few rounds, a few things, first is that even on easier difficulty there are a lot of enemies, which isn't too bad on it's own, but the issue is that the large volume makes it hard to pass through the doors, as they block them off by having 3 or 4 right in the door jam, so even the easier difficulty levels are pretty hard due to just the number of enemies making it difficult to maneuver and escape.

Also there is a bug where sometimes the enemies are unable to grab you, so they keep trying, but they are unable to.

Oh I tought I had replied to you!

That are some marvelous ideas, and it is something similar to what I have on mind! thanks for the suggestions!

The game idea looks to have a lot of potential but some features/changes you might want to consider (I only tried the demo but found some parts frustrating):

The AI Pathing and Pursuing needs to be improved. Instead of the difficulty stemming from how many enemies are spawned and perhaps their random and odd pathing will hit you, the AI could be updated to actually feel competitive and like you are being hunted. I am imagining updating the movement speed to match the Users to require the User to sprint to actually build distance while risking tiring themselves out in the process. In this world one or two pursuers would actually be really scary as they hunt you down.

Another issue that the demo had was that a single assault has pretty much zero risk. The requirement of sprinting above would keep your stamina low and would therefore make a single encounter more scary. Also, you could add a risk/chance to each encounter to make progression more difficult. For instance, the attacker to put a blind fold on you (this could lower the visibility via Unity camera settings or w/e, or reduce the field of view to make eluding future attacks harder). Or the attacker could do some form of forced drugging that makes you hornier or more tired for a period of time. Or distorts the screen and switches left and right movement like you're drunk for awhile.

Another idea that popped into my head was changing the way you lose. If this was a real scenario, you'd either make it to the throne and reclaim the dungeon or you would become stuck unable to get past the enemies. It might be a really neat concept to simply have the game go until the User acknowledges escape is impossible and gives up. I'm imagining my character is absurdly aroused cuming repeatedly each assault exhausting herself, I'm blindfolded and drugged to the brim so when I have a chance to escape I keep failing to get away with each failure bringing the odds lower and lower.

Finally, a suggestion that would require a good amount of asset/designing work (everything above should fit within the current game, and Unity pathing should be pretty easy to improve) would be something like "rare spawns" that need to be avoided at all costs. They could force you into nearly impossible to win scenarios, like really intense blindfolds, humblers (for male characters), or whatever else. Really set in the panic when seen and cause a make or break type scenario.

Anyway, good luck with the game! I'll be keeping tabs on it!

Thanks for the feedback!
The AI pathing is the real problem, the stupid AI is a product of unity's navmesh failing to properly calculate distances in realtime in narrow corridors/small rooms. Im working on a solution to it, but so far i haven't progressed much. But improved AI is a priority.
Other types of bondage things are planned as well (like blindfolds, gags, etc) but will be getting in, in future updates.

The system for rare spawns is actually in-game, it just spawns "pursuers", which are slightly more stronger than normal opponents, and will take you a lot of effort to make them lose track on you. All of these things will be improved once i can get the new AI working.

Thanks for the feedback, and im glad you enjoyed the demo.

One thing that you might want to look into. It seems as though the enemies aren't able to pivot. I don't know if you are forcing a constant speed which forces turns to be an arc or whatever, but none of the enemies ever just pivot in place. I think I ran into this before using Unity and it was something like that. Allowing the enemies to pivot in place will also allow for more fine grained pathing. as their turns aren't these giant arcs.

I don't remember finding an option for enabling this. i will take a look, but that is actually a great observation, i haven't realized that they aren't able to pivot!

Reply
Eren The GREAT1 year ago

Wow wonderful ideas. I hope producer can do. Waiting for release and i will buy

Alright, I played the demo. Very fun game, has potential! Here are a few things I'd like to see added:

1. A map that fills out as you explore the dungeon, because the gps arrow is broken. Although given that the PC's hands are bound behind their back, it's not entirely realistic (no more realistic than them opening doors and crates though).

2. More variety to pursuers. Each level has like 3-4 kinds of girls (don't know of guys though), it's not bad, but we want mOaR(!). Maybe randomly generate them?

1. Some doors aren't aligned to the archways, so you can peak into the next room. Not sure if it's a feature or not, but I'd say - no.

2. The AI is quite bad: I've had pursuers run in circles around me once, without attempting to grab me. Sometimes they just aimlessly run into a wall.

Another thing I'd like to see improved (though it's unlikely to happen): the character models. If the faces and bodies are more-or-less fine, then the feet look awful. 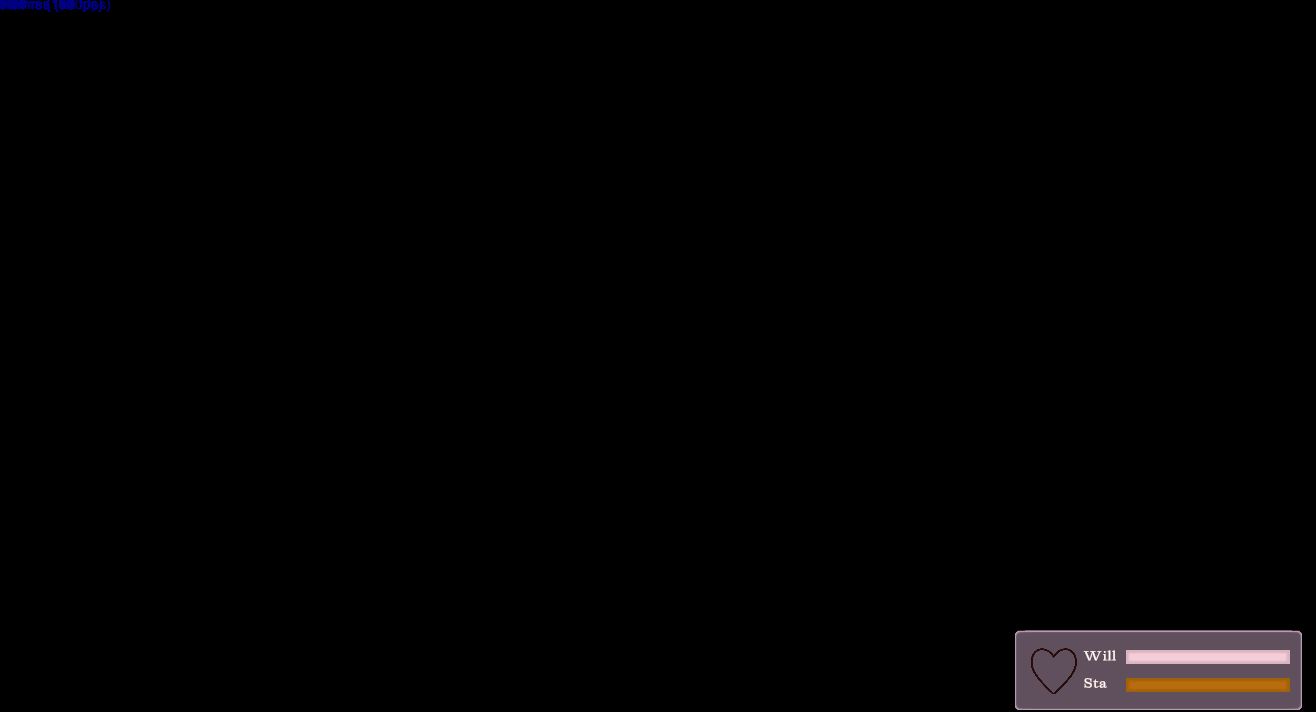 I get this screen every time I try to play the demo. Does it mean my graphics card can't handle the game? I can see the frame counter going crazy in the upper left corner.

I think that may be the case, but im really unsure about it.

maybe more Bondage options and/or some foot fetish stuff you can switch on/off in settings?

Yeah, there are more bondage options planned for the upcomming updates!

well made and the stuck glitch is only with males

which stuck glitch? can you provide with a bit more info (the faster i locate the glitch the faster i can fix it!)

Hello, this is a bug that has slipped by, it will be fixed on saturday!

thanks for reporting it!

No problem! Glad to help!
The gender bug is fixed, but now it seems that you can't escape or resist any more, and sex just goes on forever. Unsure if that's related to the gender fix but that's where we're at now. Having fun with the game though!